Loud, broken snoring could be a sign of a hidden condition called obstructive sleep apnoea (OSA) that can be life-threatening. It’s also treatable so worth getting checked out.

No matter how hard we all strive for equality, one thing’s for sure. About twice as many men snore than women; and between the ages of 30 and 55, the ratio of snoring is around 20 per cent of all men, compared to just five per cent of women.

And snoring is no joke as it is a symptom of a much more problematic condition called sleep apnoea.

With this condition, you’re not just disturbing those trying to kip around you. Sleep apnoea means the sufferer stops and starts breathing while they sleep.

It comes in a variety of forms, though the most common is called obstructive sleep apnoea (OSA).

As a sufferer, you’ll possibly only know if you’re a victim of this condition because of its indirect effects. Feeling like you’ve barely slept, waking a lot through the night and struggling with your moods and concentration levels in the waking hours. 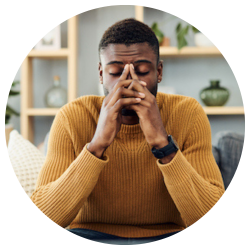 For those beside you, in the next room or possibly the next house, the signs that you’re suffering from sleep apnoea may present in several ways.

If you’re making gasping, snorting or choking noises in your sleep, snoring loudly and even noticeably stopping breathing in your sleep, then there’s a good chance you may need some help. (You won’t be the only one if it’s especially loud).

In the case of obstructive sleep apnoea, the causes may stem from being overweight. Excess tissue causes airways to narrow, which may be exacerbated by sleep position, poor diet or alcohol.

The resulting lack of sleep and strain on the respiratory system means what may just seem to be little more than loud snoring can be a life-threatening condition.

Sleep apnoea is linked to an increased risk of stroke and incidence of high blood pressure. It can put a serious strain on relationships, too.

Wake up to treatments

Because issues around snoring are so common, there’s several treatments and changes to sleep hygiene and general lifestyle that you can make to combat the condition. Snoring aids, designed to open up the airways and bring a silent night to all, are available over the counter.

Other tried and tested tactics include sleeping on a golf ball, which is placed in the breast pocket of a t-shirt worn back-to-front. Or, wearing a gum shield-like mouthpiece (mandibular advancement device) to bed which holds your airways open while you sleep.

If your GP suspects the cause is sleep apnoea, with its potential for longer-term health issues, they may refer you to a specialist sleep clinic for tests.

In some cases, sleep apnoea sufferers are prescribed a CPAP machine. This gently pumps air into a mask you wear over your mouth or nose while you sleep. Surgery may also be used to help breathing, by removing large tonsils.

Cutting back on alcohol (especially at bedtime), quitting smoking and losing weight will all help. Specialist wedge-shaped bed pillows can also get you into a position that will prevent snoring.

Time for a tongue workout?

One possible cure could come in the shape of mouth and tongue exercises.
Researchers from Brazil put a group of snorers through tests, performing simple exercises three times a day. It was reported in the medical journal Chest.

The exercises, which included pressing and holding the tongue against parts of the mouth whilst saying specific phrases, proved to be effective in reducing incidents of snoring by about a third.